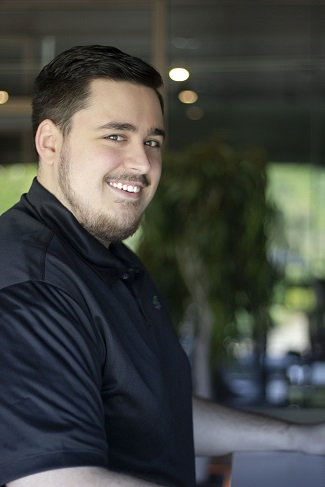 Hometown?
I am originally from Dracut, Massachusetts. I moved to Pembroke, New Hampshire, before high school, then to Concord, New Hampshire in 2017.
What professional events do you participate in, or what skills or accomplishments have you attained, that sets you apart?
I received my bachelor’s degree for Computer Science and Entrepreneurship in 2018. My most recent achievement was receiving the Karla Vogel Award for Computing Excellence from the University of New Hampshire.
What was your first memory of using computers?
My First memory was using my dad’s Windows XP computer to attempt to build roller coasters in “NoLimits Rollercoaster Simulator.”
When you’re not found in front of a computer you are…
When I am not in front of a computer, I am generally at a comic book shop, playing Dungeons and Dragons, working on various projects, or just hanging out with friends and family.
What was the last great book you read?
The last book I read, was “Ignition! An informal History of Liquid Rocket Propellants”, by John D. Clark. I have always been fascinated by anything that has to do with space and this book was an interesting read.
What is something unique about you?
I really enjoy building computers and have just started using liquid cooling in my custom builds. My computer spends just as much time in the build and tweak stage as being a fully functional system! I have also assisted many of my friends and family with assembling systems of their own.
What is a silly or interesting event that you’ve participated in previously, and what did you take away from the experience?
I think the most interesting event I took part in was the VEX Robotics World Championship. I participated alongside 500 teams from around the world and it constituted some of the most hectic days of my life. It ended with me announcing the Teacher of the Year award to our robotics advisor at the award ceremony. The biggest thing I took away from it was the importance of time management, because the competition went on if you were at the field or not.
What would you do if you had an extra 5 hours every week?
I would spend those extra hours working on various personal projects. It always seems that when I get into a rhythm working on something, time starts to get away from me, and the next thing I know, it’s 1:00 in the morning!
If you could go anywhere for an entire month, where would it be and what would you do (or why would you do it)?
If I could go anywhere for a month, I would say Switzerland. I would definitely go in the summer, and spend my time just taking in the scenery.
What are you most frequently heard listening to?
I am a fan of a wide range of music genres, from electronic to alternative to 80’s rock and heavy rock.
Favorite sports teams?
I would say the Patriots would be my favorite team.