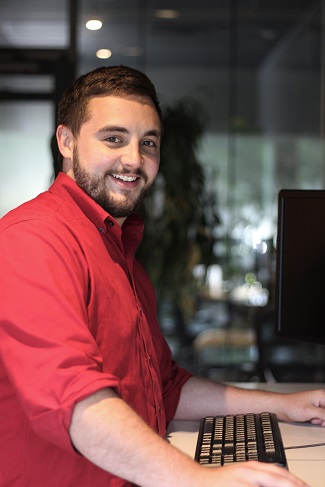 Hometown?
Peabody, MA
What are your technology specialties?
Working for an MSP often means specializing in a lot of different things! I’d say I’m strongest with Server Administration, Office 365, various cloud platforms, and realizing that the issue is always DNS!
What was your first memory of using computers?
I remember my Dad bringing home a big Dell computer with Windows 98 on it. It probably took him about 5 hours to get everything plugged in and booted! Not long after that it felt like I’d come home every day from school and sit in front of the computer waiting for my various crushes to log into AIM.
When you’re not found in front of a computer you are…
I’m usually playing around outside with my dog, thinking about what I’m going to eat next, gaming, or getting some tasks done. No matter the circumstance, though, it’s never long before I’m back in front of a computer!
What is something unique about you?
I used to really enjoy powerlifting and would compete in the 165lb weight class as a teenager. At one point I held the record for best deadlift at 555lbs. Man, I have to start working out again…
What would you do if you had an extra 5 hours every week?
With an extra 5 hours each week I would ideally try to accomplish more home projects that I’ve been putting off: Paint the kitchen cabinets, build a chicken coop, put together some raised beds for gardening…the list goes on and on and on and on!
If you could go anywhere for an entire month, where would it be and what would you do (or why would you do it)?
I would get a lot of enjoyment out of going to the Hawaiian Islands for an entire month. I’ve been to Maui once and it was a true paradise. If I had a full month I’d spend it hopping around to the different islands and taking advantage of the different hikes, beaches, tours, and cultural experiences.
What are you most frequently heard listening to?
I listen to lots of podcasts. The Joe Rogan Experience, The Fantasy Footballers, and Stuff You Should Know, to name a few. If I’m in a music mood it’ll really depend on my mindset. If I wake up ready to conquer the world it might be Jay-Z, or if it’s a relaxing weekend I’ll put on some Stevie Wonder.
Favorite sports teams?
Patriots, all the way…but rooting for my Fantasy Football team is a close second! Sundays typically aren’t my most productive days during the season!